The Winners of The Literary Connoisseur Week of Giveaways! 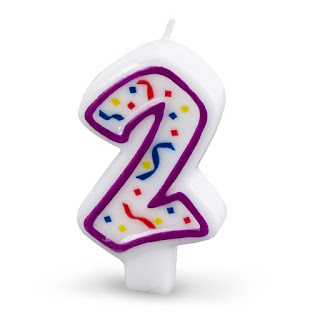 What a wonderful way to spend my 2nd Bloggerversary! I hope you had as much fun as me. I'll make this quick, so you can find out who won all of the giveaways from my event! I want to thank my family, my friends (who text me and message me now and then just to ask how my blog is going), my authors, my friend Jennie, who suggested I become a book-reviewer in the first place, my friend Denise, who set me up with my very own blog and website, and the very first author to ask me to review their books, Juli Page Morgan. Without you, I literally could not have made it to two years old. You keep me going, so let's all look forward to many more years of The Literary Connoisseur!

And now, it's time to announce all of the winners! If you didn't win this time, not to worry. There will be many more giveaways in The Literary Connoisseur's (and her Lit-Wits') future! 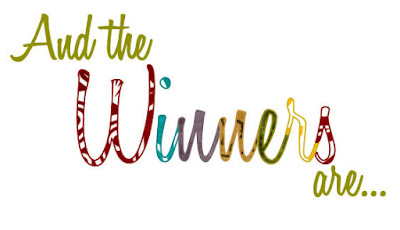 Giveaway #11 (ecopy of You Don't Think She is by Max Shenk) goes to...AMBER DOVER!

Giveaway #13 (winner's choice of signed copy of Atancia by Wren Figueiro, or set of ebooks of Atancia and For Atancia) goes to...SUSAN CAPUTO FINAN!

CONGRATULATIONS, WINNERS!!! Please PM me on Facebook with your information, and I will send it right on to the one responsible for your prize!

If you didn't win this time, please don't worry. There will be more celebration, more giveaways, and more fun soon!

My very best wishes to you all, and thank you SO much for contributing, joining the event, and celebrating my 2nd Bloggerversary with me!! XOXO

Posted by The Literary Connoisseur at 3:59 PM No comments:

Dudley and the Toy Keeper's Chest by Patrick Algermissen 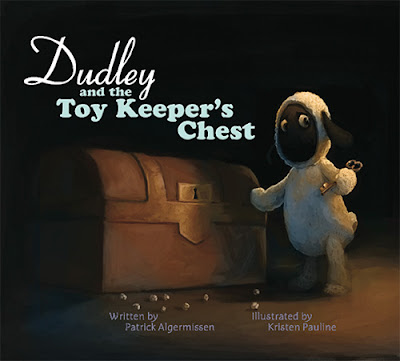 I haven't had much history with reviewing children's books, but thanks to the wonderful experience I've just had, I may have to start making it a regular occurrence.
Reading Patrick Algermissen's Dudley and the Toy Keeper's Chest has awakened the child in me and reminded me of how magical children's books can be. I mean, think about it. These are the books that open the majesty that is the literary world to young readers, and starts the love affair with books that will last a lifetime.
Dudley and the Toy Keeper's Chest is pure wonder. As soon as I started this wonderful little book, I was immediately sucked into Dudley's story with the hope that he, and the other toys, escape the evil clutches of Silas, a wooden wolf toy. This book made me want to transport into the Toy Keeper's shop and get lost for hours and hours discovering new toys to play with.
Any child who is lucky enough to pick up this book will be transfixed with Patrick Algermissen's words and Kristen Pauline's gorgeous illustrations. (I know I was, and I am almost in my twenties.)
But if there's one thing Mr Algermissen's Dudley and the Toy Keeper's Chest has taught us, is that the magic of a truly captivating children's book will stay with us forever. 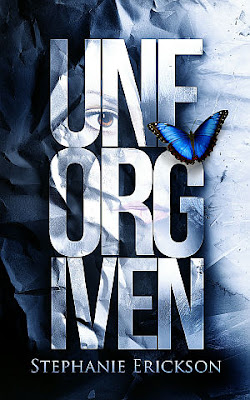 Oh, boy. I don't think I've waited for a book like this to come out in quite a while. Ever since I read, finished, and LOVED Stephanie Erickson's Unseen, I have been anxiously waiting for Unforgiven, book two in the series.
But thankfully, my wait is over! (Actually my wait was over a few days ago, because I was lucky enough to receive an advance review copy from Ms Erickson, so really I am one lucky duck.)
I think, although I was excited for this book to come out, there was a part of me that was afraid book two wouldn't be as magical as book one. It wouldn't capture my attention, and I would simply fall out of love with the series (which has actually happened before with some series that should have stayed novels, IMO).
I was wrong. Very, very wrong.
In Unforgiven, Mackenzie, "Mac," Day is heartbroken after some terrible news that she received at the end of Unseen. But Mac's sadness quickly turns to anger against the ones responsible for this tragedy, and the Unseen's enemy, the Potestas.
This is where we are when we begin Unforgiven.
This book was beautiful. It's odd to call it beautiful, because this book does start an all out war between the Unseen and the Potestas, but it just is. In Unforgiven, we get a first hand insight into the minds of mind readers, the walls they build up to protect their defenses, and the dark secret each Unseen has been hiding since the day of their initiation.
The way Ms Erickson created this universe of the Unseen is phenomenal. It's books like Stephanie Erickson's that renew your love of reading and remind you of why you became a reader in the first place. You read books like Unforgiven, and this wonderful, magical world surrounds you, and you think, "Yes. This is right where I need to be."

It seems as if it were only yesterday that I was browsing the aisles of Books-A-Million (my local bookstore chain), searching for books, any books, by Darren Shan. (This was about six years ago, or so.) One of my closest friends had recently suggested Mr Shan's work to me, and as soon as I finished the last page of his book, A Living Nightmare, I needed more.

Needless to say, my thirst for Darren Shan's written word has not ceased, and I still look out for more of his work to devour.

That's where the love affair with his books started. I was a young, impressionable bookworm, and I was looking for "WOW" books to keep me hooked. Thankfully I could rely on Darren Shan to supply me with reading material. The more books he came out with, the more I read, and the more I fell in love.
Now, as a full-fledged Darren fan, I am beyond words to express my excitement.

After two years of blogging (only twenty-four more days until my two-year Bloggerversary), I had built up the courage to ask Darren Shan to do an interview about his books. And guess what.

He said he would be happy to.

When I said I am beyond words to express my excitement, I meant it. I am not only thrilled and ecstatic to do this interview with Darren Shan, I am truly honored.

But I digress...If I continue to ramble on about my feelings about this interview, I will never actually ever get to the interview!

So, without further ado... 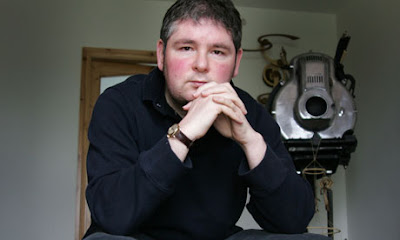 Darren Shan: I write for YA (as Darren Shan) and adults (as Darren Dash). My books are a mix of genres, but tend to get sold primarily as horror books, because they do delve quite deeply into the darkness!
The Literary Connoisseur: At what point of your life did you know you were meant to be a writer?

Darren Shan: I wanted to be a writer since I was 5 or 6 years old, which is when I realised I was good at telling stories. But I suppose I was 12 or 13 when I consciously made the decision to devote myself to pursuing writing as a career.
The Literary Connoisseur: Do you have a favorite thing about being an author?

Darren Shan: Meeting or corresponding with my fans. It sounds corny but it's true!
The Literary Connoisseur: How did the plots to the Cirque Du Freak series, the Demonata series, and the Zom-B series come to you?

Darren Shan: With Cirque Du Freak, I was sitting in a car one day, babysitting a sleeping cousin, and I started thinking about what it would be like if a young boy ran into a vampire at a circus. The Demonata all began with a poem about its main villain, Lord Loss -- I wrote the poem several years before the book, and just couldn't shake the character of Lord Loss from my thoughts; I felt that I had unfinished business with him, and I was right! With Zom-B, I wanted to write a book about the dangers of racism and not taking a stand against hatemongers, and zombies just seemed like the best way to do that.
The Literary Connoisseur: Do you have a favorite out of all of the books you've written?

Darren Shan: The Thin Executioner, a surprisingly sweet fantasy tale about a boy who wants to chop off heads for a living when he grows up!
The Literary Connoisseur: What would you like to say to your devoted fans?

Darren Shan: I love you every bit as much as you love me!
The Literary Connoisseur: Would you say you've connected to certain characters that you've written more than others? If so, who?

Darren Shan: I feel attached to all of my main characters (even the bad guys) but Mr Crepsley is my favourite out of all the ones I have created.
The Literary Connoisseur: All of your books have an irresistible and creepy story that chills you to the bone--what made you choose the horror genre to write? Or did it choose you?

Darren Shan: I think it chose me. I always say to young writers to write the sort of stories they would like to read, and I've always been drawn to dark, edgy tales.
The Literary Connoisseur: Are there any new and exciting projects you're working on?

Darren Shan: I'm almost at the end of my Zom-B series -- book 11, Zom-B Fugitive goes on sale in September, and book 12 next March or April. I've already started work on my new series, but I can't say anything about it yet, as it's still at a very early stage. And I plan to release another book for adults under the Darren Dash banner next year -- but I have a few to choose from, and I'm just trying to figure out which to plump for.
The Literary Connoisseur: Is there anything else you'd like to add?

Darren Shan: My most recent release is a fast-paced, full-on horror book for adults called Sunburn, which went on sale at the start of May. It's been drawing rave reviews, so I heartily recommend it to all of my older fans. (As a rough guide, I'd say 16 years upwards, though I was reading Stephen King books when I was 11 or 12, so I never like to forbid any of my books to my more adult-minded younger readers!) 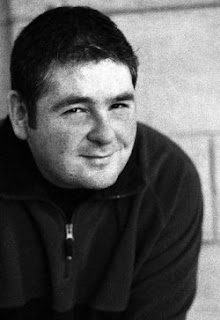 Be sure to check out Darren's latest release, Sunburn

And of course, start your Darren Shan craze with some of his captivating books...

Posted by The Literary Connoisseur at 4:44 PM No comments: