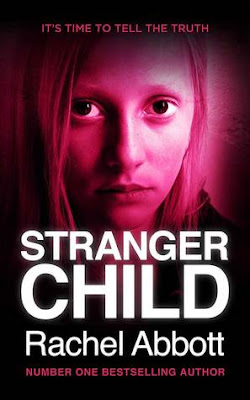 DCI Tom Douglas is on the hunt again in Rachel Abbott's fourth crime drama, Stranger Child.
When Emma Joseph finds a strange, dirty-looking girl in her kitchen. she panics, thinking that the perfect life she's built with her perfect husband will crumble in just one home invasion.
But what she doesn't know is that this girl is a flash from her seemingly "perfect" husband's past. The girl has a lot more secrets than she lets on...and they may just destroy Emma, her husband, and their baby's lives.
Since this is the fourth book in the DCI Tom Douglas series, it is not my first read of Rachel Abbott's. I read her books in order, and fell in love from the very first story.
But there's something about Stranger Child that was...mesmerizing. All of Rachel Abbott's books are exceptional (I didn't put her on my Favorite Reads of 2015 list for nothing), but Stranger Child took the cake. (At least, until I read Kill Me Again recently.)
This just proves that although her books are all wonderful and nail-bitingly intense, her writing has gotten even better as time goes by.
This makes me positively thrilled for what Ms Abbott has in store for us as readers, and DCI Tom Douglas (who happens to be one of my favorite fictional characters ever written).
Stranger Child is positively addicting. It can be read by a new reader of Ms Abbott's at any time, but if you're interested in starting a binge of this series, I highly recommend starting with the first DCI Tom Douglas book, Only the Innocent.

Posted by The Literary Connoisseur at 2:48 PM No comments:

The Storied Life of A.J. Fikry by Gabrielle Zevin 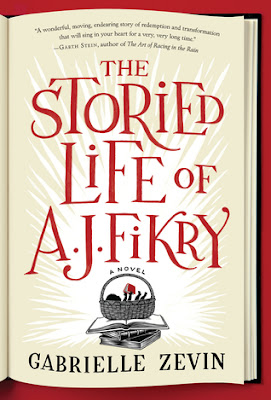 A.J. Fikry is the cynical, cranky, and no-nonsense owner of an independent bookstore. He is very specific about the books he reads, the books he sells, and the people who enter his life. But what if he has no control over fate?
After a prized collection of Poe poems is stolen from his house, A.J. stumbles upon an abandoned baby left alone in his bookstore after hours. Is he ready to take care of another human being? Or is he better off sticking with books?
In The Storied Life of A.J. Fikry, readers will lose themselves in A.J.'s story, and fall in love with his adventures as a bookstore owner, reader, and parent.
This was a very sweet read. I won't overplay it and say that it's one of the best stories I've ever read, but I don't regret my time spent reading it. It was precious. Hilarious, full of inside jokes that every reader will understand, sweet, meaningful, and extremely sentimental at points.
I know it doesn't take much to make me cry, but I got quite choked up near the end!
A.J. Fikry is all of us. When we share opinions of books not everyone will get. When we passionately protect books with kid gloves as if they're our own children. When we first walk into a bookstore and smell that unforgettable smell of fresh paper, old paper, and ink. A.J. understands. It is obvious that Ms Zevin is a huge reader herself, because reading this book is not unlike chatting with an old friend about your favorite novels.
Avid readers and bookstore-lovers will cherish this book as I, myself, have cherished this book.

Posted by The Literary Connoisseur at 3:34 PM No comments: 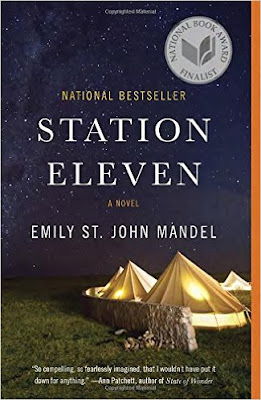 It all started with the fourth act of King Lear. The plastic snow was falling from the rafters onto the stage, Arthur Leander was giving his performance his all as any actor should, and before spectators could blink, he was dead. A heart attack, on stage, in front of hundreds of people.
That's when it all started. The end of civilization. Later that night, there would be phone calls to loved ones telling them to flee from the city. A deadly virus was sweeping the nation, and there would be no survivors. Later that week, most everyone would be dead.
Fast forward to twenty years later, we meet a band of survivors called The Traveling Symphony. These actors and musicians travel what's left of North America, and perform for whatever little makeshift towns and communities are open to a bit of entertainment. But not all people The Traveling Symphony meet are friendly.
When Kirsten Raymonde (a member of the symphony), Arthur Leander, and several other characters' journeys begin to intertwine, Emily St. John Mandel spins a story that will make connections and revelations that will knock you off your feet.
In all honesty, I could not stand this book as soon as I started it. Station Eleven was another recommended (by a friend) read of 2016, and my stomach started to twist into knots when I thought I was going to have to give her recommendation a three star (or less) rating. The beginning of the book didn't hook me at all. I was uninterested in (seemingly) the main character's (Kirsten's) story, and I didn't really care as to the outcome of her band of entertainers. I was more interested in characters who didn't have much of a spotlight in the first few parts of the book.
Halfway through, I put down my copy, went to bed, and dreamed of starting a different book that would actually capture my interest.
The next day, I picked up the book again, and felt as if the story had changed overnight. From where I picked up, suddenly the plot became very intriguing. Stories started to connect, characters were meeting, speculations were running high, people were missing and in danger, etc.
I have never experienced such a 180 degree turn in a book like this ever, in my entire life. Perhaps The Hunger Games is the only other book that comes close. (In that circumstance, I gave up shortly before "The Arena," and picked it up again after my friend threatened to kick my butt if I didn't finish it.)
This is why I cannot give up on books. If I had given up on Station Eleven, I never would have had the chance to experience one of the best books I have read in my lifetime. (Again, the same goes for The Hunger Games.) My opinion on this book went from "Ugh," to "Meh," to "Wait, what," to "(insert unintelligible curse words here)."
This book is exceptional. Extraordinary. Breathtaking. Dare I say, even life-changing.
As soon as I finished Station Eleven, I just sat on my couch, borderline in tears, wondering how in the world Ms St. John Mandel could affect me so powerfully. How could ink and paper make me so happy, so hopeless, and so overwhelmed ALL AT THE SAME TIME? At that moment, I wanted to forget every other book in the world, and just devote my life to reading and rereading Station Eleven in hopes that I will catch new things each and every time.
I don't want you to go into this book expecting a huge "Oh my gosh, my life is over" revelation at the end, but if you do read Station Eleven (which I implore you, PLEASE read Station Eleven), expect the unexpected. Don't give up on it. Don't go into it with any pre-conceived notions. Just...read it. For the love of the book Gods, read this book. 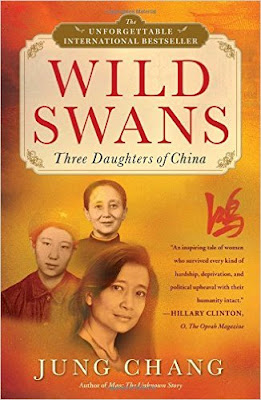 Following the theme "Recommended by Friends" reads of 2016, I have decided to review my fourth recommended read of the year, Wild Swans: Three Daughters of China by Jung Chang.
Wild Swans is the story of the author's life growing up as a child and young adult in communist China, her mother's life fighting for China as a communist with her husband, and her mother's life as an escaped concubine of a general in the Chinese military. Although their upbringings and lives are extremely different in many ways, these three generations of women all have two things in common; strength and courage.
In biographical form, Wild Swans is breathtaking, gut-wrenching, and brutal in the rawest form, but you will wrap up your overall reading experience feeling sated and satisfied.
I know many readers are not too crazy about biographies and autobiographies, but I find them fascinating. Especially Wild Swans. Jung Chang's writing is so rich and dense with powerful details, it is easy to lose yourself in every single word inked on to the paper.
I can understand some readers saying that the story is dry, and that they got bored easily when Ms Chang would delve into details about Chairman Mao's political itinerary, but I found each and every uncovered tidbit about communist China extremely gripping. This was a part of history I had yet to discover. But instead of forcing myself to sit down with a history book that would surely have bored me to tears, I was transported back in time to experience life with Ms Chang's own mother and grandmother.
There are some books that can easily be equated to cotton candy. They're insubstantial, but very light and sweet to devour. If that's the case with, say, books like vampire novels (that I freely admit to loving as well), then Jung Chang's Wild Swans is a T-Bone steak with sauteed kale, mashed potatoes, and a hot fudge sundae for dessert. 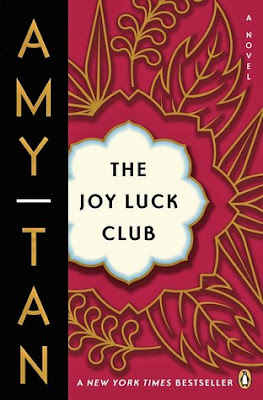 As part of my "Recommended By Friends" reads of 2016, I took the suggestion from my friend Jakki, to read The Joy Luck Club by Amy Tan. Amy Tan's work has been a whisper in my ear from the moment I started reading adult fictional novels, so you can imagine my excitement when I had an excuse to start her first work of fiction.
The Joy Luck Club follows the lives of four women who have survived the hardships of being raised in China, and their four daughters, who have had the drastically opposite upbringing of being raised in America. When one of the mothers passes away unexpectedly, things are thrown into perspective for the remaining mothers and daughters alike.
Together, the characters and readers of The Joy Luck Club will experience heartbreak, life-altering changes, and the meaning of family during dire times.
The Joy Luck Club is truly a powerful read. From the very start, I was charmed by these four older ladies, their stories of being brought up in China, and their American-raised daughters. Of course, there were times when my heart broke for them, which is only natural when you read a book about characters growing up in not-so-ideal situations. But in the end, there was nothing in this story that could sour the immensely feel-good ending that brought tears to my eyes.
I had favorite characters, and characters that I wanted to slap silly (as per usual), but not one character was either unlikable or uninteresting. There were no "dry" spots that bored me, there were no individual stories that lost my interest, and there was honestly NO aspect of this book that I disliked. Except perhaps the fact that it was too short.
This book is charming, magical, and very moving. I enjoyed every single minute of it, and finishing it has only made me more rabid to try more of Amy Tan's work.
I absolutely loved, loved, LOVED the Joy Luck Club.