Me Before You by Jojo Moyes: Book Before Movie 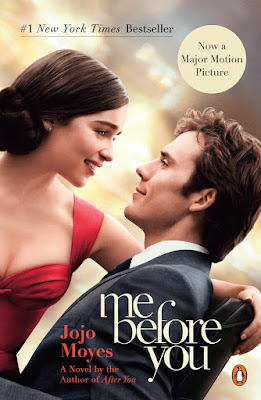 When Louisa Clark's father loses his job, Louisa becomes the sole bread-winner of her entire family (which includes her grandfather, sister, and her sister's son). When Louisa herself loses her job at a local cafe, a new opportunity presents itself.
Will Traynor is a former thrill-seeker/adventurer, now a quadriplegic. After Will is hit by a motorcyclist in a tragic street accident, he is wheelchair-bound, and not at all amused by his new caretaker--Louisa.
Together, she will bring out the newly-found hope in him, and he will bring out the adventurer in her.
When I started Me Before You by Jojo Moyes, I was warned over and over again that I would be devastated by the end. My fellow readers were right, and no matter how much I prepared myself, I would not be fully aware of the emotional impact of Will and Louisa's story. That being said, in all honesty, I was not as crazy about the book as many of my friends. I enjoyed it thoroughly, cried quite a bit, and it left an incredible impression on me, but it wasn't one of the best books I had ever read.
Fast-forward a few years later--now. The movie has come out, with Emilia Clarke and Sam Claflin, and I was anxious to see it. Perhaps not anxious. Nervous. Okay, I was extremely terrified of seeing the movie, in fear of the emotional spectacle I would make of myself. (Hence, why I chose to wait until the DVD came out to see it, instead of going out in public--with people.)
As I said before, I loved the book, but I wasn't obsessed with it, as I am with, say, The Fault in Our Stars or Charles Sheehan-Miles' The Last Hour. But I was interested and curious enough to look forward to this movie.
Boy, was it a pleasant surprise.
I was expecting a movie like The Secret Life of Bees, that was beautiful and charming, but Me Before You was...incredible. Hilarious, sweet, emotional (VERY emotional), well-acted, beautiful, and enough to be a movie I would watch and rewatch over and over again. In a way, I enjoyed it more than the Fault in Our Stars movie, because Me Before You was not so overwhelmingly sad to the point that I couldn't watch it again. (I have yet to watch The Fault in Our Stars for a second time after seeing it initially, two and a half years ago...)
When I went into the Me Before You movie, I expected to be blown away by Sam Claflin since I am already just so in love with him (thanks to The Hunger Games movies and Pirates of the Caribbean), and not so much with Emilia Clarke. Not because she isn't talented, but because I had never seen her in a role before. (I am going to read the Game of Thrones books before I watch the show.) But Emilia Clarke was the star of Me Before You. She was the most perfect Louisa, more perfect than I could have ever pictured Louisa. She WAS Louisa. Of course, I am always impressed with Sam Claflin, but Emilia Clarke stole the show.
All in all, the book to movie adaptation of Me Before You only enhanced my opinion of the book, as did other remarkable adaptations like The Help, Gone Girl, and The Perks of Being a Wallflower. Amazing book with an even better movie, and that's quite an accomplishment.

Posted by The Literary Connoisseur at 9:50 PM No comments: