The Discovery of a BookCrossing Book/Sweet Rein Vol. 3 by Sakura Tsukuba 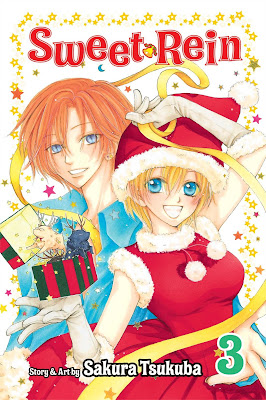 Alright, I freely admit that this was my first crack at reading Manga.
For some reason, when my friends discovered Manga and started delving into the interesting world of Japanese Animation, the fascination skipped over me. (As did High School Musical--sorry.) I went right from Goosebumps and American Girl books to Twilight and the Mortal Instruments. I don't say this insinuating that getting into Manga was a rite of passage that I missed, but in a way, it was, since I seemed to be the only young adult who didn't understand the fascination.
That being said, years later, an opportunity presented itself (literally) for me to finally try my first copy of Manga.
There is a wonderful little bookworm program called BookCrossing. Readers will find a book they love (or a book they want to read, a book they don't like so much, etc.) put a BookCrossing tag in it (with a code), and cast it off at a random public spot for someone to find, read, and drop off again so someone else may find it. As each person logs in that they found said book, readers come together and discuss (online) how they liked or disliked the book they found. It is incredibly neat. Ever since I discovered BookCrossing (around five or so years ago), I have been dying to find one myself. Finding one while I was living in Florida had slim chances, since the state is so big, and not many people (at the time) were casting out books. My one chance of finding one was to make a trip to Disney, and I really only ventured into Orlando for one thing--the Wizarding World of Harry Potter.
I have a point to this blog post, I promise.
Once I moved to New England, the chances of finding a BookCrossing book had become much higher, but I honestly had given up on finding one once I found out how difficult it would be to find one in Florida. I could have cast one out myself, but that took an effort, and I can be extremely lazy. (Yes, I admit it!)
Fast-forward to living in New England. About a week ago, as I was doing a photo shoot for my business HerShelves Elves, I was wrapped in as many sweaters and jackets as possible, scouring a park, placing my elves in front of giant Christmas decorations for my Facebook page. As I walked to the center of the solid, icy, packed snow, I placed my elves on a bench covered in bows and wreaths. But something else was in my shot, wrapped in a plastic zipper bag.
My very first BookCrossing book.
With a fleeting glance, I noticed it was Manga, but I didn't care. I finally found one! I quickly took my pictures, and shivered as I ran back to my car. I knew I had to read it. I found this book for a reason. It had to be the book gods' way of telling me to expand my literary palate even more.
So, with excited and giddy shaking hands (and a tad bit of trepidation), I started Sakura Tsukuba's Sweet Rein Vol. 3.
I honestly didn't realize it was the last volume of the saga until I started reading about Kurumi (the Santa) and Kaito (her reindeer), and realized they were already well-acquainted with their readers. Nevertheless, I delved in anyway (against my inner OCD's shrieking will in the back of my head).
It was difficult adjusting to the word bubbles and phraseology of the characters' dialogues, but surprisingly the order in which you read the word bubbles was extremely easy to understand. Right to left with the comic windows, just like reading Hebrew, but left to right because it's English. (It's much easier than it sounds.)
Of course, with my mind being a tad more closed than I'd care to admit, I thought the way Kurumi, Kaito, and Sakura Tsukuba's reoccurring characters communicated with each other was a bit childish and silly, but, I admit, I gradually became amused with them.
The book is told in four parts, Spring, Summer, Autumn, and Winter. Some seasons I liked more than others (Summer and Winter), and I actually found myself picking a favorite character out of the bunch. In addition to those pleasant surprises, I was also shocked to find myself disappointed when the book ended suddenly. (The last few chapters, which I THOUGHT was another installment of Spring, was in fact a preview of another Tsukuba story.) I was so disappointed. Disappointed enough to casually look up Sakura Tsukuba on the internet...and, you know, just see how many Kurumi and Kaito books there were...and, you know, just check it out, just in case the story continued...
Okay, FINE. I admit it. I became hooked. Horribly hooked. I want more of their story, I want the first few installments of the Sweet Rein books (because Vol. 3 is the LAST, apparently), and I want to casually stroll through the Manga sections of the bookstore (which I would never normally venture into unless it was attached to the YA section).
I hate to sound a tad hippy dippy, but this fateful find of a BookCrossing book opened my eyes to a new universe of literature. Now that I've finished the book, I plan on dropping it off at a different park in the vicinity, and logging on to BookCrossing to thank the originator of the book for introducing me to Manga.

Posted by The Literary Connoisseur at 3:07 PM No comments:

An Other Place by Darren Dash 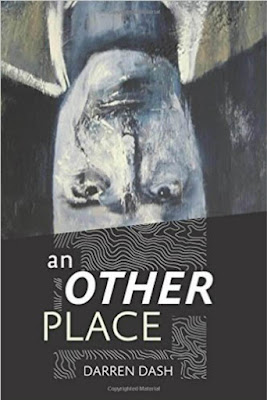 I was contacted by Darren Dash about a week ago to read his upcoming novel, An Other Place. Being such a huge fan of his, it was a surprise and an honor to receive an email from him, let alone hear that he wants me to review a book of his, before it's even released.
Once the shock subsided, I was ready to sink my fangs- er- teeth into his new story.
Newman Riplan is not who you would call a saint. He is successful at his work as a troubleshooter, well on his way to making his first million, but he is certainly not everyone's cup of tea. Easily hypnotized by the crook of sex, alcohol, and drugs' spindly finger, Newman is entirely out of it when his two friends send him on a plane to a mystery vacation.
Little does Newman know, that on his way to his destination, he gets lost in An Other Place. Everything is wrong with this Other world. The currency is teeth, no glass is to be found anywhere in the city, and strange beasts run free with every corner you turn. No one there seems to know of anything relating to the world Newman has left, and he quickly realizes that he can never leave.
I have never been so happy to be an outsider (looking in) so much in my life. Although I didn't care for Newman (at least at the beginning), I took comfort in the fact that I was not facing this nightmare of a journey on my own. I have been successfully terrified by Darren Dash's YA books (written in his alias, Darren Shan), but never to this extent. Darren Dash has opened a new artery of terror in An Other Place, and has let the adrenaline-laced blood flow into his readers.
Several times this book made me shout, "What? WHAT?" I couldn't dig my heels into the ground far enough to slow this ride. I am not entirely sure if I can even categorize this book as a book I loved, as I have with his other books. Though, in all honesty, I know for a fact that this story will stick with me. As soon as I finished the last page, I felt as if I had been sucker-punched in the gut.
"I liked it" or "I loved it" doesn't come close to summarizing the feelings I have for An Other World. I hated it, I wanted to leave Newman's head, I wanted to explore, I wanted to take a handful of Cheryl's sleeping pills, I wanted to tell Newman everything was going to be alright, I wanted to scream at him to run, I wanted to talk to the Alchemist, I wanted to stay, I wanted to flee, but most of all, I wanted to know more. I had to know how this city was born, and what Newman has to do to beat it.
One thing you can say for Darren Dash's writing; he has you always wanting more.
All in all, An Other Place is unlike any book I have ever read. It had hints of The Twilight Zone, Pines, and Station Eleven, but not quite. An Other Place was an entity of its own.
So, Darren, I have one question for you: Where do you think you are?

Posted by The Literary Connoisseur at 11:34 PM No comments: