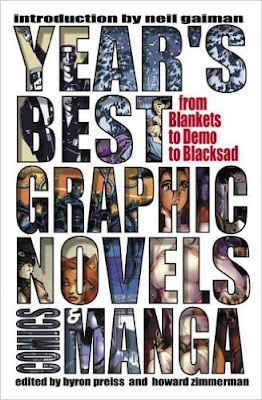 It seems as if I have become quite lucky with BookCrossing finds within the past few months, because lo and behold! I have found another. The book Gods were smiling down upon me on that snowy and slushy winter's day, when I ventured to the same park where I found my previous BookCrossing book, and stumbled across The Year's Best Graphic Novels, Comics & Manga: From Blankets to Demo to Blacksad.
"Really?" I thought. "Another book about graphic novels and manga? Someone must really want me to expand my literary palate even more..." (Even though I clearly already admitted that I now like manga.)
Even though I had already picked up a BookCrossing book from that spot, and from that BookCrossing member before, I figured the book would be better off being read and re-released into the wild, rather than it sitting in the cold, wet snow for another few days. I brought it home.
When I picked up my first BookCrossing book, which happened to be manga, I was excited to go on an adventure into a genre of literature I had never experienced before. When I picked up my second BookCrossing book, I was less excited. I always imagined that I would read every BookCrossing book I found, because I felt that in some cosmic twist of fate, I was meant to pick it up and read whatever was left for me, but...a book summarizing comics and manga? Do people actually read these books, or are they just books left over from garage sales that eventually find themselves on secondhand shelves? Is this a coffee table book? I didn't think this book was actually readable.
But every time I thought about moving on, re-releasing the book, and diving back into my Harry Potter reread (which, I'm ashamed to say, I have not finished yet), I felt guilty. How could I pick up this book and take it home just to have it sitting on my couch for two weeks before returning it to the wild?
I had to read it. So I did. (It didn't hurt that one of the forewords was written by Neil Gaiman.)
The forewords sold me, and it wasn't just because one was written by Neil Gaiman. In the forewords, these writers and comic-enthusiasts alike wrote about what comics and graphic novels meant to them when they were younger. How they aspired to write comics one day, to meet Stan Lee, and to collect and collect comics until their little geeky hearts were full to the brim with joy. These are feelings I have had for many things in my life, and I recognized their passion, like a zebra recognizing a similar black and white-striped pattern.
I understood their passion, and I thought to myself, "I must find out what makes these dorks so passionate about word bubbles, cartoons, and flying super men in tights and capes."
Since the "Year's Best" book was a decent variation of samples of different comics, graphic novels, and manga flavors to taste, it's easy for me to say that there were some stories I loved, some I found amusing, and some I would be satisfied to never see ever again in my life. For instance, Hsu and Chan? HIT. Any of the manga? Miss. Owly? Hit! Serenity Rose? Miss, miss, miss. Miss, to the point of me reading two pages, and skipping the rest. (And I never skip in books.) I also loved Family Reunion and Robot in the Rain. Yossel and Demo were incredibly dark (and creepy--especially Demo), but the artwork was exceptionally done. Some of these comics and graphic novels (I leave out the manga but none of them particularly tickled my fancy) were lacking in story, but were beautiful to gaze upon, and some were simple drawings with a story deep enough to bring you to tears. I found Secret Identity fun and easy to read, along with Blankets, Queen and Country, Ex Machina, and Sandman (bravo, Neil Gaiman).
After I finished the book, I read the reviews of it on Goodreads, and was disappointed to see that many readers gave it low ratings due to the size of the samples per comic, graphic novel, and manga. (Each sample was a page to 5 or 6 pages long.) I definitely disagree. I feel that the sizes of the samples were more than satisfactory, because they gave the reader a chance to move on to something different without becoming bored.
I won't credit myself more than I deserve, and say that I am an expert in this genre of books. I don't think I would even be able to tell the difference between a graphic novel and a comic, given the chance. But I will say this: My mind has been opened even more to this field, I now have some obvious favorites (and obvious un-favorites), and I look forward to reading more from these writers and artists.


Posted by The Literary Connoisseur at 4:01 PM No comments:

A Wizard's Forge by A.M. Justice 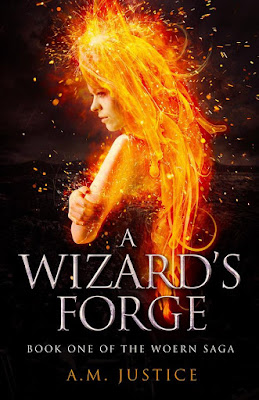 Victoria of Ourtown is the heroine the world needs right now. Snatched from her peaceful life of becoming the youngest Logkeeper Ourtown has ever seen, Vic must survive the torment of being sold into slavery, learn to rebuild a life after losing her identity, grow the courage it takes to lead an army of men five times her size into battle, and fight against the half of her that feels pulled to return to her vindictive master... In A Wizard's Forge, Vic will face trials of life, magic, and death, and it's up to her, and her alone, to survive.
When A.M. Justice told me that she had re-written her novel Blade of Amber (one of my favorite review requests), and asked if I could read it and give her my two cents, I was thrilled to hear that I would be revisiting one of my most favorite stories. Apprehensive, in fear that my favorite characters would be put in danger they didn't face in the original story, but thrilled nonetheless. Blade of Amber was such a wonderful book, I was beyond curious to see what A.M. Justice had done to A Wizard's Forge (the re-write) to make it different.
As a reviewer, I read every review request like a review request, unless an author's writing is impressive enough to mask the real world around me, and fully submerge me into fiction. As I read A Wizard's Forge, I disappeared into its pages. I felt reconnected with the familiarity of a beloved story, but at the same time, I felt as if I was reading it for the first time. When I read Blade of Amber, I would keep track of minor imperfections in my head (which I can't help, because I have been asked to edit many books since I became a reviewer), and I would ask myself, "This book is amazing, but does it compare to books one would find in a bookstore?" Blade of Amber was one of the best review requests I had ever read, but in all honesty, it still had enough imperfections to be categorized only as a review request from an indie author. I say this with brutal honesty, because I have to make it known, the volume of improvement A.M. Justice has made with her book.
In A Wizard's Forge, I found no imperfections. If I hadn't known that A.M. Justice was an indie author before I read this, I would have never guessed that she is not a Barnes and Noble bestseller. With her updates and new corrections that turn Blade of Amber into A Wizard's Forge, she has evolved from indie author into an up-and-coming author. I do not say this lightly, because if you ask me honestly, I will tell you that most of my review requests come from authors who all need some tips, tricks, and editing before they contend with the big dogs. I would have said the same for A.M. Justice if I was going solely based on her first draft of Vic's story.
I write this long, drawn-out review in hope of making it clear to all, that A.M. Justice has improved her story on an impressive level. She is ready to be published professionally. She is ready to have her books on bestseller shelves around the world. I highly encourage her to pursue getting A Wizard's Forge published, because this book should not be overlooked.
I gush a lot about books I love, I know I do, and I'm sure my reviews can come off like I'm crying wolf, but please believe me when I tell you that this is a good one. A really good one. I will happily back up Ms Justice if she decides to take her editing and publishing further, because I believe in this book. I believe in its success. I look forward to the day when I get to boast about my autographed rough draft of A Wizard's Forge, while the rest of the world is racing to the bookstore to find a copy of their own.

Posted by The Literary Connoisseur at 3:10 PM No comments: