When It's Love, I'll Let You Know by Andrea Sommers 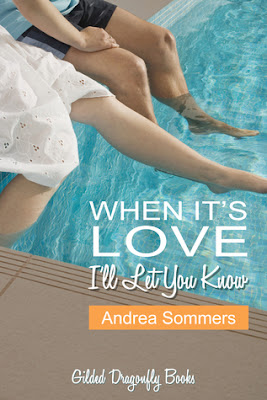 Peter DeHavilland is successful, handsome, charming, a world famous director, and...everything Kate Adams avoids in a man. Kate is unsure of herself, inexperienced, best friends with a stunning Hollywood actress, and is desperately trying to make it as a script writer for soap operas. Though Peter is twelve years older than Kate, an unintentional blind date turns this unlikely couple into a possible match.
If only their friendship would stop growing.
Will these two finally put aside their differences and realize they were only searching for each other their entire lives? Or will their friendship get in the way?
Only time will tell in Andrea Sommers' When It's Love I'll Let You Know.
I am being completely honest with you when I tell you that I was interested in this story from the very beginning. Besides some adjustment to Andrea Sommers' writing (which was only needed because I had just finished a book by an entirely different author just minutes before), When It's Love, I'll Let You Know had me from the very first page.
Kate didn't irritate me. In fact, I actually found her incredibly realistic and relatable.
I loved Jen, Kate's best friend. For a Hollywood bombshell, she was very down to earth and lovable in her own right.
Even Peter didn't annoy me! Each and every character had their charming qualities, and together they made me very interested to see where their story would go.
Every night, I wanted to stay up to read more of this book to see what was actually going to happen. Would Jen find happiness? Would Peter and Kate FINALLY admit they love each other?? Would there be a happily ever after?
Everything was just as it should be in a charming romance, until...
Until about 75% of the way through the book. I won't spoil it for future readers, but there was a turning point, a happy turning point actually, that turned my "I really liked it" to an "I liked it."
I almost feel as if the characters changed, and not for the better. Kate and Peter's relationship went in a direction that ended up disappointing me. Jen, thankfully, was left intact, but I was sad to see my OTP (one true pair) change so drastically. Maybe it's just me. I don't know if any other readers noticed this shift in the story, but it hit me like a ton of bricks.
It's quite disappointing, to be honest. I was waiting for that, "a-ha!" moment, and instead I got an, "...oh."
When It's Love, I'll Let You Know was every unrealistic "romance novel" I've ever read turned realistic and beautiful. I only wish it had an ending as strong as the beginning.
I encourage my readers to try this love story, and let me know what you think.