The Beacon by Sam Kates 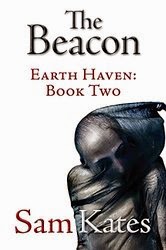 In this exciting and terrifying sequel to Sam Kates' The Cleansing, all hell has broken loose. More than three quarters of the planet's population is dead, and those who survived are waking from almost death to a world destroyed and annihilated by extra-terrestrial beings.
Beings who want the human race wiped out, and who want the world all to themselves.
If a plague, almost extinction, losing everyone you love, and seeing the only world you've ever known come to an end wasn't enough, things are about to get much worse.
These foreign beings, the same beings who destroyed the human race, are about to launch The Beacon.
I thought I was in love with The Cleansing. I named it my number one favorite book of 2013, because it was. The Cleansing was unlike any book I have ever read in my life. It was beyond exceptional. Sam Kates' writing had me completely and entirely captivated from the moment I picked up my Kindle copy of The Cleansing.
I honestly couldn't put it down. It was a book I thought about every single moment of the day, especially, when I had to put it down to do mundane things such as eating, sleeping, and occasionally using the restroom. The Cleansing made me want to skip meals, socialization, and getting fresh air just so I could read one...more...page...
As soon as I finished it, I had to tell the friend who recommended the book to me, and Sam Kates as well, how much I loved it. I loved it. I loved it so much, I now consider it one of my favorite books ever.
When my friend told me the sequel was out, I knew my TBR list had to be cleared.
No way was I reading anything else besides Sam Kates' The Beacon.
To be honest with you, it took me a little bit to get back into the swing of things in the Earth Haven's world. New characters were introduced, and old characters that I had grown attached to in book one were in the middle of situations I had forgotten about.
Of course this is of no fault of the author...besides the fact that he made me wait SO long for book two...
It only took me a little bit to remember where we left off in book one.
But when I got back into the swing of things and remembered what exactly left earth in such a catastrophic state, I was just as hooked as I had been with book one, perhaps even more if that's at all possible.
I didn't expect to love The Beacon as much as I loved The Cleansing at all. At ALL. But my gosh, did Sam Kates prove me wrong.
Sam Kates has completely outdone himself with The Beacon. In the second Earth Haven book, he has proven to his readers that he has the impeccable talent of creating a universe that avid readers across the globe will salivate over. Sam Kates has proven to the world that he was born to be a writer.
You would think that The Beacon would satisfy the Earth Haven hunger I've been desperately trying to sate for a year and a half now, at least a little bit, but you would be wrong. If anything, The Beacon has made me even more desperate to delve deeper into the Earth Haven world. I finished this book much too fast. I regretted not savoring it more the moment I reached the last chapter of the book.
I have read a lot of books that are incredible, and I have read a lot of books that left a lasting impression on me, but The Cleansing and The Beacon are different from other books...
...they hold a very dear part of my heart that cannot be occupied by any other books out there. These are books that will stick with me forever. Sam Kates' writing deserves all of the compliments I have to give and more. I fear I cannot put into words how much I adore his books.
So, Sam, I know that you've just come out with book two...but I have to know...when will we have book three??

Posted by The Literary Connoisseur at 4:53 PM