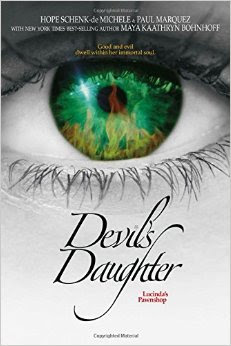 I was given a copy of Devil's Daughter in exchange for an honest review, and that's exactly what I'm going to give you.
Lucinda is the one and only daughter of the Prince of Darkness, Lucifer, and the first woman on earth, Eve. She is a mix between a fallen angel and a human, and she is eternal. She is power and darkness itself, and she has no weaknesses.
Lucinda runs a pawnshop for her father, helping to sell and disperse cursed objects. In doing this, Lucifer hopes that with enough objects sold, and sold to the right people, chaos will ensue just as he likes...in total Armageddon. But what will happen when a human male shows up in Lucinda's eternal life, and distracts her from her father's master plan? Only readers of Devil's Daughter will know.
Now for my honesty. I am not a particularly huge fan of paranormal romances. When I first started this book, I thought, "Well, at least when it's over, it'll be over and I can move on." I'm incredibly sorry for admitting that I jump to reading conclusions that quickly, but it's true. Paranormal romances, fantasy, and sci-fi books are not my forte.
I picked up Devil's Daughter, got about 50 pages into it, and put it down to go to sleep. I wasn't sold with the story, and I was actually disappointed that the book wasn't about Brittany, the woman whose perspective it is in chapter one. When the book switched to Lucinda's perspective, I was a bit turned off, and not enthusiastic about reading on.
That being said... The next day, I picked up the book again (as I said, around page 50), and I became hooked. Something happened in the book that caught my attention, and I was sold.
I knew that it wasn't going to be an absolute favorite book of mine, but I knew that I was invested in the story enough to want to finish it ASAP, and not because I just wanted it over. I actually was interested in the story.
I will read on in the series. I very much look forward to reading book two.
Overall, this book is not a paranormal romance. It's...much more than that. It's political, it's historical, it's magical, it's sweet, and it's sad. I LOVE the different characters' stories and the different perspectives, the writing was fine (it took a bit of getting used to, but easy after that initial "dip in the water"). I actually liked the book's characters (which is rare for me), and most of all, this book is about a battle between good and evil.
Between God's faithful servants and Lucifer's blood-thirsty followers, Devil's Daughter manifests a battleground that can either be resolved with true love...or worsened.