The Gone Series by Michael Grant 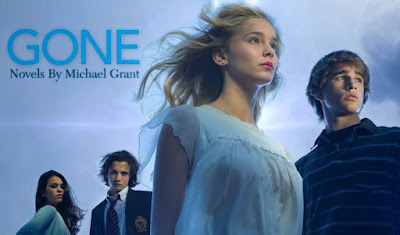 Gone.
Just like that, in the blink of an eye, everyone over the age of fifteen was gone. Teachers, parents, doctors, neighbors--all gone. Not one single adult left in Perdido Beach, California.
No one knows where they've disappeared to. But if one thing's for sure, it's that things are going to get ugly in Perdido Beach. Very quickly.
Children are starting to starve, tensions are getting high, young teens are becoming power hungry, and most of all, more and more kids are turning fifteen...and disappearing.
What will become of the FAYZ (Fallout Alley Youth Zone)? What will become of the children, young teens, and babies when they realize they are now cut off from the rest of the world? Only time will tell in the Gone series by Michael Grant.
When I first read Gone, I didn't know what to think. I had read it for a book club discussion, and I had extreme mixed feelings.
On one hand, the story was undeniably addicting. Why would every single adult in the FAYZ just disappear without a trace? Mid-driving, mid-cooking, mid-living their normal life just POOF. Vanished.
I dove into it with an open mind, fully prepared to have my socks knocked off, but that wasn't what I got. I was slightly annoyed with all of the characters (and a bit confused with the story progression), but in the end, interested enough to purchase the rest of the series.
After I read Gone, I rated it a three out of five stars. I liked it, but didn't love it.
Fast-forward to about four (or so) years later. Yes, it took me that long to pick up the rest of the series. Life got chaotic, and so did my TBR list.
In a spur of the moment, I decided to binge-read the rest of the series. I didn't feel the need to reread the first book, even though I had read it so long ago, because when I picked up Hunger (book two), Michael Grant surprisingly picked up where I left off. He reintroduced characters, went over what occurred in book one (which I was very grateful for), and somehow made it easier for me to dive back into the series after putting it down for so long.
I don't know how my state of mind stands compared to how it was when I first picked up book one, but I LOVED Hunger. Book two hooked me so hard, I went back and changed my rating of Gone. Then when I read Lies (book three), I fell even more in love with the series.
After that, I was sure that however I grew over the years, whether it be mentally, emotionally, or in maturity, it helped me appreciate this series for what it was. I fell in love with many characters, I couldn't stop reading, and I finally gave in to the fact that this series truly is genius.
Now, this series isn't one of the best series I've ever read. There are many things that still irk me, and there are enough plot, moral, and character imperfections (in my opinion) for me to still groan "Meh" at points. I won't deny that. But there are not enough imperfections to outweigh the things that really drew my attention this time around.
This series most-certainly will not appeal to everyone. I can name many things off the top of my head that will "turn off" many readers, but I can honestly say I gained a lot from finishing the series.
In conclusion, you can't always base your opinion of an entire series on the first book. Or your mental and emotional state at the time. In my case, I think I was just too young to appreciate this story for what it was. It took time for me to mature enough to handle this series, and I'm glad it turned out that way. I wouldn't trade my experience of reading this series for anything in the world.
So, if you're prepared, and you like your stories a little apocalyptic-ish, a little Stephen King-ish, and a little bit epic, pick up this series and let me know what you think.