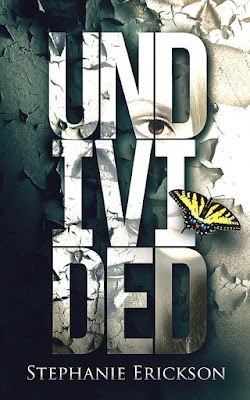 Well, I knew this day would come, but I don't think I truly prepared myself for it. One of the series that has addicted me the most since becoming a book reviewer, the Unseen trilogy by Stephanie Erickson, is coming to a close.
Mackenzie "Mack" Day has accepted the fate she was destined to fulfill, the terrorist group The Potestas have succeeded in constructing their ultimate plan of destruction and anguish, and the Unseen are coming to the climax of their story.
This is Undivided.
From the day I started Unseen (book one in the trilogy), and frantically messaged Ms Erickson to tell her how deeply hooked I was with her story, I knew I was in love. I have read many wonderful stories since the day I started blogging and writing reviews, but Stephanie Erickson's books are unlike any other. I had such an enormous book hangover from reading Unseen, I couldn't even concentrate on the book signing I was attending at the time. All that kept running through my head was, "But what is Mackenzie doing right now? Is Owen with her? Most of all, is (my favorite character) Mitchell okay??"
Although Ms Erickson was thrilled to hear my feedback of one of her novels, she grew apprehensive about the next book that was soon to be released. Would I devour Unforgiven as much as I devoured Unseen? What if the next two books didn't hold the same magic as book one?
I was nervous too. This has happened with me before. I'll fall in love with book one, but as the series goes on, I'll lose interest and chalk it up to the fact that the author should have kept the series as a novel. (Of course this is just my opinion, but I would bet money that every reader goes through something similar at least once in their life.)
Stephanie and I were both worried when it came time for Unforgiven to be released.
Little did we know that we had absolutely nothing to be worried about. Not a thing. Because Unforgiven was JUST as incredible as Unseen, if not better. I once heard an author say, "I want to hear that my fans favor my more recent books as opposed to my earlier novels. I want to know I am getting better."
In this case, and although I love her earlier novels as much as her later ones, I think Ms Erickson is getting better.
Fast forward to two weeks (or so) ago. Ms Erickson informed me that book three was in my inbox, and ready to be read and reviewed. Before I started it, we had a similar discussion to the one we had when book two came out.
The entire trilogy's fate was resting in Undivided's hands. If this one flopped, would I look at the entire trilogy differently? Would I have to go to Goodreads and sorrowfully rate it a four or (inhales) a three? (Let's not even talk about the possibility of a two...I can't see rating ANY Erickson book a two.)
I think it's safe to say that Stephanie and I both were incredibly nervous to hear my feedback this time.
Without spoilers, and without ruining the ending, I am thrilled to say that Undivided was the most perfect ending for the Unseen trilogy. Nothing was rushed, and there were no miraculous, "Oh look, the heroine just annihilated every single one of the bad guys with one blast of her gun" scenes that wrapped up the story in one neat little package. There were twists that I didn't expect (and definitely didn't see coming), and most importantly, the final installment of the Unseen trilogy did not disappoint one bit.
In fact, it may be my favorite of the series. Or, well, I don't know. Perhaps I'll have to reread them to form a more objective opinion...
All in all, the trilogy lived up to my expectations. It's one of the best series I've read as a reviewer, and I stand by that statement wholeheartedly.
I look forward to the many, many other books Ms Erickson has plans to write (especially her upcoming book, The Fate, and the final installments of her The Dead Room series), but I will be honest with you when I say that I will miss Mack with every fiber of my being.