Archibald Lox and the Rubicon Dictate by Darren Shan 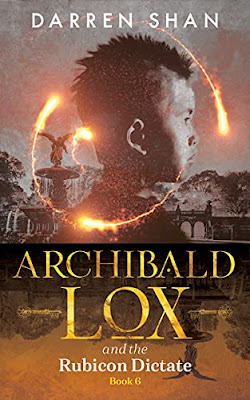 "They say he fell in battle, but demons like him don't fall, just rest up in the shadows, then come back stronger than ever."

Tensions between the Merged and SubMerged realms are precarious at best, but there's no bad blood a little game of grop, or even the event of a lifetime can't help mend...right? With the Tourney matches in full swing, our main character saved from the unforgiving grip of merciless killers, and the plot to kidnap a young prince underway, one might believe that all is peaceful in the capital city of Niffelheim.

But the wheels of perilous plans are constantly in motion in the Merge, and sinister forces beyond our heroes' control are growing stronger by the moment.

With a heart-pounding cat-and-mouse chase that takes us on a quest to the Born's New York City, the Rubicon Dictate is an epic conclusion to Darren Shan's second Archibald Lox volume, that readers will be sure never to forget.

I maintained throughout my reading experience of the Archibald Lox series that book two in volume one, the Empress of Suanpan (that I've yet to write a review for), was by far, my absolute favorite. The way Darren Shan transported us with his words to worlds unknown was just extraordinary. Pure magic. But even as he painted a verbal portrait that made it easy for readers to place themselves directly in the narrator's shoes, I found myself going the extra mile by closing my eyes and fully immersing myself in the wonders of the Merge. Although each and every one of Archie's adventures so far has been an absolute delight, the Empress of Suanpan alone had this particular effect on me.

That was, until the Rubicon Dictate. A quarter of the book in, and the Empress of Suanpan was riding her unicycle the long way down to second place.

Archibald Lox and the Rubicon Dictate has a different flavor than the other books in Archie's story, and it's a flavor I savored quite a bit. The twists and turns, political intrigue, and masterful moves and countermoves between the Merged and SubMerged kept me coming back for more, day after day after day, even well after the book was finished. I feel as if in some ways, the series is maturing as Archie himself is maturing. It's subtle, and the shift from childlike wonder to sobering adulthood is gradual, but it's beautiful, and it receives a commending Literary Connoisseur ovation from me. There was a point of no return in the Slides of Bon Repell (book 5) for our hero and his dutiful readers, and I think it's at that exact point where we've made the switch from a good series, to an unforgettable one.

If the first six books of this mad roller coaster of magic and mischief are any indication of what Darren Shan has in store for the final three, I think we're in for quite the landing. Darren Shan truly manifests a perfect balance of the whimsy of fantasy and the grittiness of reality, and no other young adult book of his highlights that talent more than Archibald Lox and the Rubicon Dictate.

As each new installment of Archibald Lox is released to be devoured by readers, a new mystical pedal of the Merge and all its curiosities unfurls. I for one, cannot wait to see what awaits us.

Posted by The Literary Connoisseur at 10:02 PM