Archibald Lox and the Slides of Bon Repell by Darren Shan 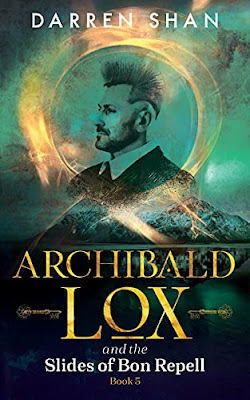 "There's always a next time, in grop, as in life. Never forget, second chances are what the Merge was made for."

The whispers travel like whistling winds from zone to zone. From SubMerged mouth to Merged ear and vice versa, everyone is talking about one thing, and one thing only. The sole affair in the Merge that can bring people of opposing sides of a war together. The Tourney.

Each standing realm is sending their star players to compete in this once in a lifetime game, which, under normal circumstances, would be the event of a millennia for our main characters to attend...if it weren't for an underlying mission that Archie and his friends are risking their safety and sanity to complete. Together, they must avoid suspicious eyes, journey into the forgotten territory of a foreign realm, and try and succeed to fly under the radar of anyone who's determined to ensure that they fail.

However, a competition that people have traveled all across the sphere to attend is likely to draw vengeful enemies as well as allies. Archie has narrowly escaped the treacherous clutches of death more times than he can count since he's ventured into the Merge, but when a SubMerged king sets his sights on him, this time may very well prove to be too much for our hero.

I have no shame in admitting that Archibald Lox and the Slides of Bon Repell, book five in Archie's story, is a slow-burner. Until about three quarters in, I considered this story of Darren Shan's to perhaps be a "bridge" book, a book that connects two more adventurous, more heart-pumping stories together with a bit of a breather in between. Which is quite how I view Harry Potter and the Chamber of Secrets; not a favorite, just a bit of a break, an independent adventure if you will, before the story reaches an epic arc that quickly ascends into the series' climax.

Little did I know that as I was leisurely observing matches of grop, gnawing on hotcats, and exploring the icy terrain of Niffelheim, Darren Shan was luring me into a false sense of security. Call the Slides of Bon Repell a "bridge" book if you must, but no ending to an Archibald Lox story has slapped me across the face like this one. Unfortunately, that's all I can reveal at this time without blatantly spoiling the entire ending for you, my dear unsuspecting reader.

By about 63%, I could not put the book down--reading in such short bursts I'd pace around my kitchen, book in hand, chewing the inside of my bottom lip with nerves. I found myself in such a constant, frantic state of distress, I'd positively search my brain to think of someone, anyone, on my friend's list who's also read this series so that I'd have someone to talk to about it.

As you all very well know by now, I am an avid Darren Shan fan. I spent many months of my teen years absolutely devouring his dark tales. Mentally envisioning his fantastical worlds, shivering at the thought of his nightmarish villains, and celebrating his heroes as said villains are destroyed and defeated. I've witnessed his characters blossom from terrified children, to unstoppable forces of nature, and I have found that familiar, "David and Goliath" comfort in Archie. There came an intense point for our main characters in the Slides of Bon Repell where I stopped dead in my tracks, looked up from my book, and thought to myself, "He's grown. He's actually grown. Our beloved scaredy cat is now a ferocious lion." It was the type of moment in a young adult book that makes a reader say, "If he can be brave, so can I."  I can't help but believe that this is a trait of an excellent storyteller.

This series truly showcases Darren Shan's abilities as a writer. Like Archie, I find myself thinking less about the Born, and spend more of my time thinking about the Merge and what other layers of marvels and mystery are waiting to unfurl.

The epic conclusion of this story cannot come soon enough.

Posted by The Literary Connoisseur at 8:15 PM