The Caster Chronicles by Kami Garcia and Margaret Stohl 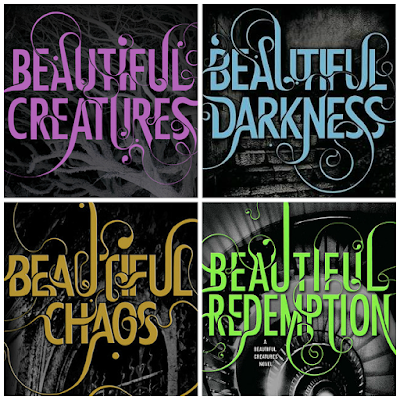 The Caster Chronicles is one of the many series I have started, but took a while to finish. I read the first book, Beautiful Creatures, a few years ago, loved it, but got so sidetracked with book review requests, book club books, talked-about New York Times Bestsellers, and more, I never got a chance to continue on in the series.
Until now.
A much-needed reading lull made its appearance into my TBR list pretty recently, and I decided to do a binge-read of the rest of Kami Garcia and Margaret Stohl's Caster Chronicles.
The plot for the Caster Chronicles series is pretty basic, but intriguing enough to pick up. Typical southern boy in a typical southern town becomes increasingly drawn to a mysterious girl in his class. Ethan becomes so enthralled with Lena Duchannes, he unknowingly gets sucked into her magical world of Casters, Sirens, Incubi, and more magical beings hell-bent on destroying life as we know it.
I fell in love with book one, where Ethan first meets Lena. I loved how the book was told in his perspective, I love that the romance was kept to a minimum (thank you, Kami and Margaret for that), I loved the plot, and I loved that the author built up this world that readers of YA books have never delved into before.
I became pretty intrigued with the series, enough to buy all four books, and read on to see what was going to happen next in Ethan and Lena's world.
Book two, Beautiful Darkness, had the same effect on me. I LOVED the plot, I was deep into the story line by this point, and was very content with how the story continued.
Also, a female character named Liv was introduced in book two, and she was so much fun and so refreshing to read about, I almost grew tired of Ethan and Lena's story, and wanted the book to focus more on Liv. Not quite, but almost. She was a wonderful addition to the story. She remains, to this day, my favorite character from the series. I can't actually ever recall a time when I walked away from a series with my favorite character being a girl/woman. That's a first for me, I think.
Now, on to book three and book four, Beautiful Chaos, and Beautiful Redemption. I'm sorry to say that this is where my love affair with the series started to feel like a drag. In all honesty, I grew a little tired of the recurring characters, their "charm," and their, in my opinion, immaturity. By book three, I wanted a book about Liv and Marion, because those were the only characters I looked forward to reading about.
There was a big turning point at the very end of book three that made me itching to get my hands on book four, and that lasted quite a while into book four (enough for me to rate it four stars, not three), but it still had a lingering aftertaste of disappointment.
Don't get me wrong, I still enjoy the series and care about the characters, but I'm... I just feel like, by this point, I'm just waiting for my happily ever after, and an ending, so I can move on.
This may sound confusing, because the Caster Chronicles is over, but in a way it's not. Now I'm in the middle of (Lena's cousin) Ridley's series, and I'm ready to move on. (Same characters, similar plot lines, etc.) I hate to say that, I really do. But honestly, I just want what's best for my characters. A happily ever after, a ride into the sunset, and no more unnecessary problems.
Whatever Caster Chronicles-related books come from Kami and Margaret, I will read. You bet your book loving, sweet patootie, I will read them. I want to know what happens. And when my characters' stories are (finally) over, I will miss "hearing from them." But when their story is over, I know I will be satisfied, and relieved, when it is tied up in a neat little bow.
Overall, the Caster Chronicles series, for me, is riding the fine line of 3.5 stars.

Try the first book in the series...

Or binge-read the entire Caster Chronicles...

ebook
Posted by The Literary Connoisseur at 4:51 PM