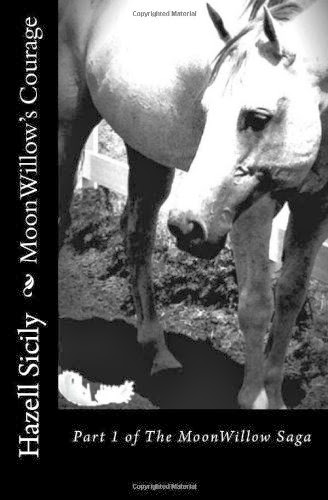 In the beautiful and peaceful land of Dumar, humans have a connection with Wings like no other place in the world (or universe). For the longest time, humans have been accepted and claimed by Wings and have developed a connection that becomes unbreakable.
We are introduced to Carra, our main character, who is closing in on nineteen (the cut-off date for being claimed by a Wing). Carra is frustrated by life and is overwhelmed with pressure from everyone around her, but little does she know that a great adventure is awaiting her.
In this book Carra is tested mentally, physically, and emotionally almost to her breaking point. But she is strong, and she will succeed in preparing for the Great War. At least, we hope.
I think I'm really starting to enjoy the Fantasy genre. Before, I was skeptical, but now as I read on, I'm starting to like it more and more.
I always adore strong heroines in stories, and MoonWillow's Courage is definitely not lacking in that area. Carra is a perfect character to read about if you're a young adult (or older) because she's very strong and strong willed, even though she has some growing to do.
MoonWillow's Courage is aimed at YA as its target audience, but honestly anyone can read this book and enjoy it. It's highly enjoyable, period. Hazell Sicily certainly has a knack for storytelling.
There were points where I did get a bit distracted, but that was quickly remedied by me actually focusing!
This story is packed full of adventure, intrigue, and sentimental moments that will warm your heart.