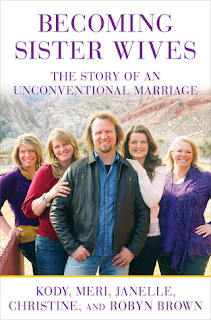 Becoming Sister Wives is the Brown Family's story of how each of the Polygamist wives met their husband, Kody Brown, their life together and their struggles in every day life.
See, what people fail to realize is that the Browns have problems just like every other normal family out there. They have jobs, kids, bills and fights like every family. Although not every family has four moms, a dad, 17 kids and a camera crew.
The Browns' goal for their show Sister Wives was to explain to everyone that watched, that they are just like you, but with a different religion and a different lifestyle. Shortly after their show, they came out with Becoming Sister Wives, their book.
The book starts out with an introduction by Kody, followed by each sister wife's telling of their meeting and their relationship with him. Each sister wife has a different role in the Brown house. For instance, in the book you learn that Meri married Kody for love, whereas Janelle married him for more practical (financial) reasons.
This book is VERY educational and insightful to the open-minded reader. This book opens opportunities to learn about a completely different lifestyle that I- personally- never gave much thought to. It's inspiring.
When I first learned about the Brown family, I was skeptical and not very impressed. But after I read Becoming Sister Wives and actually got to know the Brown family, I fell in love with them. They're so normal! They read Harry Potter, they're open-minded, they're funny, the kids are precious and smart, Kody is a wonderful dad and husband and each wife has their charms. (Although I have my favorites... *cough* Janelle and Christine *cough*)
I now watch their show with a whole new outlook on their life and way of living. It was an absolutely brilliant move for them to come out with this book; it shows that they're human and should be treated as such. Even now I see "fans" of theirs on Facebook claiming that their lifestyle is "disgusting" and that Kody is "a horrible and misogynistic man." To that I say, "Leave them be and get off their fan page!"

I adore this book. It's packed full of love, friendship, motherhood, fatherhood and family bonds.