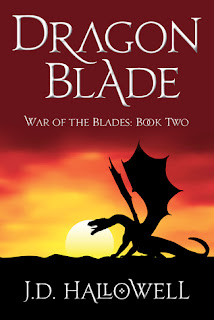 Dragon Blade by J.D. Hallowell is the epic conclusion of the War of the Blades series, based around Delno and Geneva, a hero and his bonded dragon. As the pages turn, the continued battle for power rages on.
I'm sad to say that I've finished Delno's story, and I am now without a J.D. Hallowell book.
As soon as I started Dragon Blade, I was doubled over with laughter. (A little tiff between Delno and Jhren over Delno's lack of concentration had me guffawing very unattractively!)
For some reason, when I first started Dragon Blade, I knew that the story was ending... That Delno and Geneva would finally discover the evil mastermind that was behind so many deaths in this War of the Blades. Once I got closer to the ending I became anxious about the conclusion... The fighting, the different sides of light and dark magic, the war and especially the deaths.
But though I knew some things were going to happen, some of the author's plot twists had me gasping aloud in shock.
I'm sad to say goodbye to Delno, Geneva and Nat- my favorite character- for now. I say for now because I'm going to miss them so desperately, I absolutely see myself going back to visit them.
As I said in my book review for Dragon Fate, this is typically not my genre. But because of this author's writing and story line, no matter what genre you prefer, you will not be able to put these books down.

The ending to the War of the Blades series has me completely satisfied and sated. Not only with the story, but with life itself

ebook
.
Posted by The Literary Connoisseur at 4:47 PM