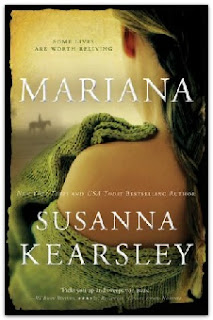 From the very first time Julia Beckett saw Greywethers house, she knew that she was going to own it one day. Even though she was only five, she knew she was destined to live in and own that house. And now, after 25 years, Greywethers is now hers. Julia may think that fate brought her to this house, that she was meant to live there, but she soon believes that she's not only connected to the house, but to its history and its previous inhabitants as well...
I am a HUGE fan of Susanna Kearsley. Everything I've read by her has been amazing, brilliant, exceptional and a five star novel, in my opinion. When I read Mariana, the only previous experiences I had with her work were The Winter Sea and The Rose Garden. Both had me sobbing uncontrollably for happy and sad reasons. But when I started Mariana...it was different.
About halfway through Mariana, my mom asked me how I liked it, and I responded with an honest, "It's...good" but without enthusiasm. For some reason, it just wasn't hitting me emotionally like the others before it! I wasn't attached to the characters, the story wasn't grabbing me like The Rose Garden had and I was just...blah.
But then I got to the last chapter. I got about halfway through, stopped and said, "Well, wait a second! What is going on here?" and that is what got me steamrolling to the ending.
The last few pages...I swear, were the BIGGEST shocker of my life. I had a complete double take, a shake of the head to clear my thoughts, a slap to my face to say, "Is this reality?!" and...I was done. I finished the book, stared ahead and cried. And cried, and cried, and cried.
I can't say whether it was out of happiness or sadness because I WILL NOT give away spoilers. But...wow. Just wow. I was absolutely blown away and impressed by Susanna Kearsley's way of turning my "Eh" review of Mariana into a "Holy crap!" reaction. Also for turning Mariana from a less liked book of hers into one of my favorites.
Now, although I've read everything by her and I do have other books of hers that I like better than Mariana, it was still the story that left the biggest impact on me.